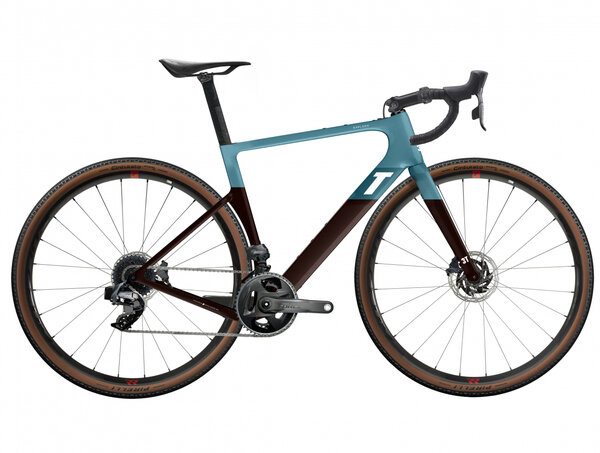 Force AXS semi-WIDE 2x12 for the ultimate performance. Just like your road bike, only everywhere.

THE ALL NEW EXPLORO RACEMAX

Whether riding road or gravel, we love speed. So everything on the RaceMax frame is engineered for that. The end result is the first gravel bike that:

Best of all, the very same RaceMax frame can be built up with a focus on pure speed with 35-42mm WAM (Width As Measured) tires in 700c can also be turned into an unstoppable machine with very wide tires up to 61mm WAM. Handy for that epic ride or trip abroad. And with two wheelsets, you can switch between the two setups easily. That’s RaceMax.

Starting from our favorite tires, we engineered a perfectly fitting rear wheel cutout (with mud clearance of course) and a closely trailing downtube to catch the airflow coming off the front tire. We added a super-narrow headtube (yet with a big steerer inside it), a multi-shape fork and aero details from seatstay to seatpost and from the shielded water bottle to the direct-attachment brake mounts.

Most importantly, we engineered this for realistic riding speeds, wind speeds, tire widths, bottle positions and even for mud. We don’t care if it is theoretically fast in the windtunnel with a fantasy spec. We care if it is fast the way you ride it in real world conditions.

The RaceMax frameset is is fastest with 35-42mm WAM tires. That’s when its top speed rivals the best road bikes out there. So whether you’re on asphalt, easy or tougher gravel, you can be sure you have the fastest setup. But depending on where you ride and how fast you ride, you may want an even bigger tire for ultimate traction and control. Good news: 90% of the aerodynamic advantage of the RaceMax frameset still works with tires up to 61mm WAM.

In a way, the Ultra is the reverse. It is aerodynamically optimized for 55-61mm WAM tires thanks to its wider downtube near the front tire. This extra width better redirects the air coming off a bigger front tire. If you prefer a smaller tire, you can run a 700c tire up to a 46mm WAM. But as you go to a smaller tire, the Racemax becomes the faster choice again. In addition, the Ultra combines its aero seattube with a round seatpost so you can fit a standard, dropper or suspension post.